The sign outside Fleet Street Press declares: We maintain barrista-client confidentiality. Once upon a time, Fleet Streets bars and cafes would have hummed to the sound off-the-record conversations of journalists. But the press has long left Fleet Street to the lawyers of the Royal Courts of Justice across the road and, judging by the number of coloured highlighter pens on the table next to me, students from Kings College. 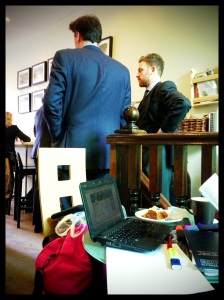 But don’t let that put you off.

Fleet Street Press is a curious combination of cool café (the ‘bilingual’ menu offers flat whites as well as lattes) and … how can I put this … Well, it serves coffee in those huge paper cups that are synonymous with the big franchise chains.

The place is run by Andy, who describes himself as a disillusioned Starbucks manager, and Dave, who looks every inch the hipster barrista, which explains everything.

“If we can tempt people in with one of these,” says Andy, indicating the tall cups, “maybe we can re-educate them onto the smaller coffees.”

It is also very popular with Italian tourists who wouldn’t dream of going anywhere near the franchisees on the Strand, Andy says with more than a hint of pride.

Fleet Street Press was called Get Coffee until earlier this year and the re-brand is reinforced by an exhibition of press photos by the appropriately named Fleet Street Photo Exhibition a collection of 50 images from  photographers working for the national papers, international wire agencies and local papers around the UK.

The group hopes to show that press photographers are not paparazzi. “We witness history and we are the eyes of the British public who rely on us to bring the news,” says award winning photojournalist Edmond Terakopian on his blog about the exhibition. 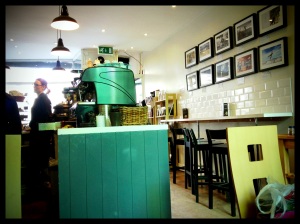 The images are sale for about £150 – which isn’t a bad price for a photo these days. And Andy says he hopes the exhibition will be a long-term project with pictures changing over time.

That alone  makes it a good cafe by Cafés That Are Not Franchises standards. Add a basic selection of sandwiches, panini and cakes and a very friendly atmosphere and this is definitely a place to check out.