Getting a bit jaded about hipster coffee bars? Ever wondered what Patisserie Valerie was like before it became a franchise? Head down to Shaftsbury Avenue end of Greek Street in Soho to London’s oldest patisserie.

Owned by sisters Michele and Tania Wade, Maison Bertaux has all the charms of the old, rapidly disappearing Soho; the perfect antidote to hipster barista bars. 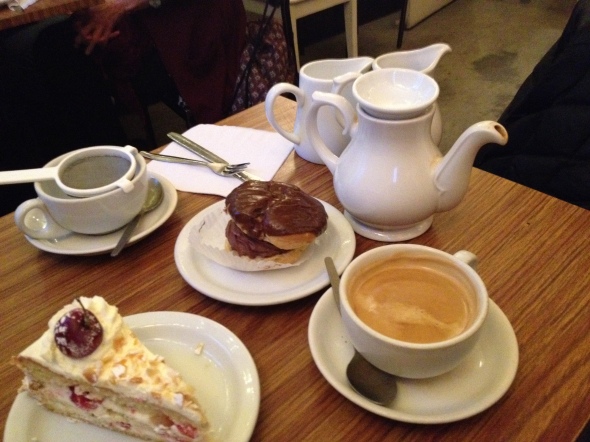 The fabulous fluffy, fruity and creamy creations in the window are all baked on the premises. The furniture is old and battered and the ambience is decidedly Bohemian, with art hung and in some cases drawn directly on the walls. The single toilet is decidedly down at heel. According to Wikipedia Maison Bertaux is ‘home’ to a number of artists. 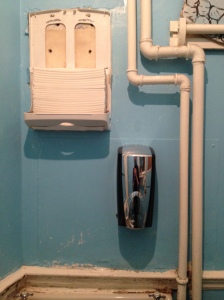 The charms of the WC

Ordering is a matter of pointing at things and asking ‘what’s that’ before finding a table. As well as the most amazingly indulgent cream cakes there are tarts, croissants and a few savouries.

On a warm day you can sit outside and watch Soho go by, but we prefer to get a table upstairs among the art and the arty types who can usually be found holding court.

Maison Bertaux is at the heart of what remains of ‘old’ Soho, close to Norman’s Coach and Horses, a traditional pub that hides a rather nice tea room and veggie restaurant upstairs, and just a few minutes walk from the Algerian Coffee shop, Mecca for lovers of the coffee, tea and exotic chocolate.

« The wonder of seaside cafes: from the Guardian